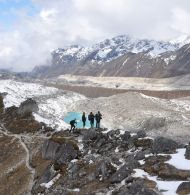 Goechala is situated in the state of Sikkim which is a perfect destination for adventure lovers.Trekking in Sikkim is extravagant with flourishing valleys, fine-looking orchards and dark forests. Its unrivaled collection of flora and fauna, add charisma to the adventure of trekking expedition with verdant green peak trails of Sikkim. The trek to Goecha-la actually route in the region of the Kanchenjunga National Park that is open to guests.The trek comprises the big grazing land and opaque forest which comes in way. Day by day you are enjoying your trek more and more as you can feel the essence of beautiful landscape views.Goecha-la trek is an admired trek which will add cherishable memories.

New Jalpaiguri Railway Station(NJP) is located in the Jalpaiguri District which is considered to be the Gateway to the Northeast. All major cities and towns are connected to NJP via the Indian Railways. The closet airport is Bagdogra Airport which is about 16km from NJP. From NJP we take a taxi to Yuksom in Sikkim. This journey will take us approximately 6 hrs. Yuksom is a beautiful town in West Sikkim which was once the capital of Sikkim. Overnight stay in Yuksom

This is the first day of the trek. After walking across open fields we enter the beautiful valley of the Rathong river. En route appreciate ancient Oak, Conifer and Bamboo forests and the luxuriant ferns and delicate orchids that line the trail . Yuksom (1760m) marks the entrance to the Kangchenjunga National Park.

Just after leaving the village you can see Baktim on a ridge high above the confluence of the Rathong and Prek Rivers, which will give you an idea of how to pace yourself for the day. Sachen is located at about 7200 feet above sea level. At Sachen we will find a lot of Log huts were we will spend the night.

The trek from Sachen to Tshoka involves quite considerable attitude gain. We continue walking until we reach the bridge over the river,Perk. Prayer flags in the distance are an indication of the start of the Goecha-la trail. We trek through Oak and later Rhododendron forests.

On the way we pass through Bakhim. Bakhim has a forest rest house and a tea and snack stall. We can stop and rest for a while and enjoy the view of the Yuksom Valley. From Bakhim, Tshoka, is about an hour. From a distance you will see a trekkers hut on a plateau.This is Tshoka. Overnight stay in Tshoka.

On the fourth day we have a steep climb. You will be surrounded by Rhododendron forests all around. After about half an hour in to the trek the trail changes to a well laid out path with wooden logs. In some time we reach Phedang. At 12,000 feet and a source of water nearly Phedang is a perfect place to stop for lunch. We then continue for Dzongri. Through this leg of the trek you will be reaching over 13,000 feet, so headaches are not uncommon due to the thin air. In about 6 -7hrs we reach Dzongri. Overnight stay at Dzongri.

Today we start a steep ascend to Dzongri top which will take up about an hour. This is the highest point on the trek from where we will get a 180 degree panoramic view of the Kanchenchunja range. If we start early at 4am we can reach the top just in time for the sunrise. Experience how the golden rays of the sun interact with this magnificent mountain range. After enjoying this spectacular view we retrace our steps to Dzongri.

Beyond Dzongri, the peak of Pandim looms above the Prek Valley. Below the mountain peaks are countless hanging glaciers and snowfields that define the upper reaches of this impressive alpine valley and the route to the Goecha-la , providing a taste of the days to follow. The hanging glaciers and moraine fields leave little doubt that you are in the midst of the high mountains while the alpine meadows are particularly attractive during May. From camp, head east from Dzongri to a series of cairns above the Prek Valley. From the ridge, a steep descent though rhododendron forest leads to the riverbed before heading up along the boulder-strewn riverbed to a bridge over the Prek River. The trail leads to the meadows at Thangsing(3930m). Overnight stay at Thangsing.

From Thangsing, it is a two-hour climb up the valley to Samiti Lake. The gradual ascent heads across grazing meadows that are particularly attractive in the pre-monsoon season when the wildflowers burst into a riot of colour along the watercourses. The huts at Zemathang and the terminal moraine of the Onglakhing Glacier are the base for climbing attempts on Pandim. It also marks the beginning of the climb up the moraine to Samiti Lake (4200m) – the sacred source of the Prek River. Now camping in the lake is not allowed so we will have to stay down.

The trek to the rarefied climes of the Goecha La is rewarded with unrivaled views of the massive East Ridge of Kangchenjunga high above the Talung Glacier as well as views of the high ridges and peaks that enclose the upper Prek Valley. Looking north there is a vast mountain region yet to explore, but for now the Goecha La is as far as you are permitted to go. The pass is often shrouded in mist and cloud not long after sunrise, so an early start is necessary.

The trail heads along the far side of the lake and through moraine before crossing a sandy section alongside the Onglakhing Glacier. From here, you can see the pass at the head of the valley. However, the trek through the lateral moraine is tiring – more so if there has been a recent snowfall.The Goecha La is marked with fluttering, colourful prayer flags, framing the peak of Kangchenjunga.Lead the same trek towards Lamuney and then move forwards to reach the destination for the day- Kockchurang. You can choose to set up your tent near the bank of the river or you can also reside in the trekkers hut.

From Kockchurang we trek back to Tshoka via Phedang the way we came.

We retrace our steps back to Yuksom via Bhakim and Sachen. Next day we take a cab back to NJP.

We drive back from Yuksom to NJP.